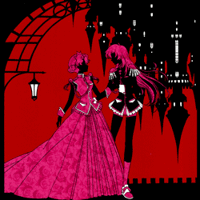 After being fascinated by a prince she met during her childhood, young Utena decides to be one herself. The prince left him a strange rose crest, promising that someday they would meet again.

She later discovers that the rose crest belongs to Ohtori Academy, where duelists with the same crest as hers compete for the Rose Bride. Eager to prove herself a true noble prince, Utena vows to protect the mysterious Rose Bride Anthy Himemiya from those who seek to abuse and use her powers for evil.

Revolutionary Girl Utena is a fantasy, yuri, romance anime television series written by Youji Enokido and directed by Kunihiko Ikuhara. Produced by J.C. Staff, the series aired a total of 39 episodes between April 2, 1997 and December 24, 1997. Its manga counterpart was created simultaneously with the anime series, but both progressed in different directions.

Utena Tenjou
Fascinated by a prince she met during her childhood, Utena decided to become one herself. Courageous, honorable, and a talented duelist, Utena possesses these qualities that win the hearts of many women in the academy. She has her attention for Anthy the most, who she thinks she has a duty to protect just like a true noble prince.

Anthy Himemiya
The Rose Bride. Mysterious and said to have no desires of her own, other people tend to abuse Anthy. Her shy, polite, and calm demeanor hide a dark and sinister past.

Akio Ohtori
Acting chairman of the Ohtori Academy, and main antagonist of the series. Akio is Anthy’s older brother, but he threats her in a sensual, incestuous, and power-driven manner, explaining Anthy’s unusual behavior. His desire to become Dios once again is the root of all the problems experienced by the duelists, specifically Utena and Anthy.

Touga Kiryuu
President of the Student Council, and directly works with Akio’s plans. He is handsome, intelligent, and talented, Touga does not spare any of his gifts and uses them all to their full potential, in order to gain more power and influence.

Kyouchi Saionji
Arrogant, ill-tempered, and egotistical, Kyouchi Saionji is vice president to the Student Council, and captain to the kendo club. Due to always losing in his rivalry with Touga, he became obsessed with the Rose Bride as he thinks of her as a mindless doll that he can control. This puts him at odds with Utena, who he cannot defeat in duel.

Student Council Saga
Saionjo receives a love letter from Utena’s friend Wakaba, but thinks of it as stupid. Instead of replying, he throws the letter into the trash bin. Later, the letter is seen to have been posted on the school wall, embarrassing Wakaba, and upsetting Utena. Assuming that it was Saionji himself who posted the letter, Utena challenges him to a kendo duel. However, seeing that Utena has a rose crest, Saionji decides to make it an official duel. Despite being the captain of the kendo club, Saionji is defeated, and Utena is engaged to the Rose Bride, Anthy Himemiya.
Later, Saionji returns and challenges Utena into a rematch, claiming that he was too confident the first time. Initially hesitant to win the duel, Utena defeats Saionji once again after gaining the desire to protect Anthy.
After seeing how others abused Anthy, Utena decides to defeat whomever duels her for the Rose Bride’s possession. She defeats Miki, Juri, and Nanami. Touga defeats Utena with the help of his manipulation skills, but Utena manages to recover, and regain her title as Champion Duelist.

Black Rose Saga
Souji Mikage hosts a student counseling event in the academy, but is actually scouting for duelists to use against Utena. After revealing their problems and inner troubles, several students are put under Mikage’s control after the latter uses his powers. Mikage turns his new subordinates into Black Duelists, with the goal to fight Utena in the Arena. Mikage does not want possession of the Rose Bride, but wants to replace her with an ill boy in order to save his life. However, not one of his Black Duelists manage to defeat Utena. Eventually, Utena challenges Mikage himself, in order to stop his plans once and for all.

Akio Ohtori Saga
After being given permission, Saionji returns to Ohtori from his expulsion. He immediately challenges Utena to a duel, but was defeated yet again with Utena’s new weapon. Later, Akio takes Touga to a place which he called “the End of the World”. They take the members of the Student Council there, in order to gain a special weapon. The power of their new weapons was determined by the strength of their bond with the bride of their choice. However, despite their enhanced weapons, Utena still defeats them all in duel.

Apocalypse Saga
Touga and Saionji discover Akio’s plans, and more of the mysteries surrounding the duels are unraveled. Touga finally accepts his feelings for Utena, and decides to defeat her in duel in order to protect her from what might happen if she became the true champion.
Utena does not heed Touga’s warning, and finds that the dueling arena was an elaborate illusion crafted by Akio, in order to gain her heart’s sword. Still, Utena decides to fight Akio and protect Anthy, who later betrays her by stabbing her in the back. Akio fails to gain the powers of Dios, even with the help of Utena’s heart sword. After the tragic event, Utena disappears from Ohtori Academy, and Anthy decides to leave.