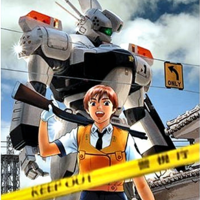 Set in alternate 1999 in Tokyo where advanced robotic vehicles called Labors are heavily relied on to reshape the city, a maverik team of the Metropolitan Police force tries to uncover and thwart a devilish computer crime aimed at the heart of the Labor industry. As a powerful typhoon approaches the city and the schemes of a mad genius start to take full effect, time is running out for the team of Special Vehicles Section 2 to act on the offensive, or risk citywide devastation by eight thousand Labors gone berzerk!