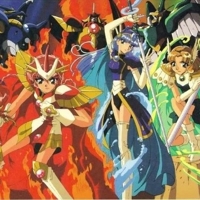 Filled with regret at having killed the very person they were sent to rescue, Hikaru, Umi and Fuu return to Tokyo. Dark forces still brew with the broken land of Cephiro and the foreign leaders of Autozam, Fahren and Chizeta, seek the crown of the pillar so they may seize its limitless power. Now the girls are summoned back by an unknown force and must find a new Pillar before Ciphiro ceases to exist. But the land is plagued by a new type of monster, led by Debonair and Hikaru’s alter ego, Nova!