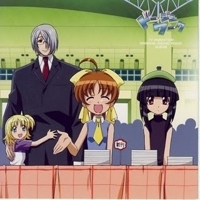 Doujin Works follows the story of a young girl named Najimi Osana and her journey as a doujin artist. She was first exposed to the world of doujin with the help of her friends. With her love for drawing, and seeing how much her friends were making in conventions, Najimi decides to become a doujin artist herself.

However, she quickly discovers that being a doujin artist is not as easy as she thought. As she joins various conventions, she meets many new friends, and together they help each other in achieving their own goals and dreams.

Doujin Work is an anime adaptation of the comedy manga series under the same name, written and illustrated by Hiroyuki. Produced by studio Remic, the series aired a total of 12 episodes between July 4, 2007 and September 19, 2007.

Najimi Osana
After losing her job, Najimi, a young and innocent college student, decides to take a shot at selling doujinshis. She has been mostly inspired by her friends, particularly Tsuyuri and Justice, who were also doujin artists. She uses the pseudonym Beauty Love, and easily gets embarrassed when people catch her with inappropriate drawings.

Tsuyuri
Founder and only member of her doujinshi circle Panty Revolution, Tsuyuri specializes in rape doujinshis and uses the pseudonym Bloomer Girl.

Justice
Justice is Najimi’s childhood friend, and is often protective of her. He is a good doujin artist, evident by the fact that he sells tens of thousands of doujins in a single event. However, due to high production costs, Justice doesn’t make much even though his sales are high.

Soura Kitano
Seen with Justice almost all of the time, Soura Kitano is the youngest of the main cast. She had given Justice her first kiss, and expresses that she wants to marry Justice someday.

Episode 2: The Naked Young Lady
Najimi is clueless with how to start her career, so her friend Tsuyuri decides to help. Tsuyuri advises her to buy an adult game so that she may learn the style of drawing, much to her embarrassment. Since it was risky to play the game with her parents at home, Najimi decides to play at Tsuyuri’s instead. While on her way, she is unexpectedly stopped by a cop wanting to see what she was carrying. Embarrassed, Najimi zooms away in her bike and the cops chase her. She in eventually caught, and discovers that somehow the videogame fell from her backpack.

Episode 3: I’m…Barely Legal?
Najimi finally produces her very first doujinshi, and titled it Love Typhoon. However, she later finds herself unable to sell even a single copy. After a while, a man buys a copy, prompting Najimi to hug him in joy. This attracts the attention of men nearby, who also wish to be hugged by Najimi.

Episode 4: Please Stop, Master
Tsuyuri learns that Najimi had taken up a part-time job, but the latter is very secretive about it. So, Tsuyuri, Justice, and Soura decide to stalk her in order to find out where Najimi is working. Later, they discover that Najimi is working in a cosplay restaurant, where the waitresses are dressed as catgirls. Justice then gets upset after learning that the man who bought Najimi’s first doujin is also visiting the restaurant regularly.

Episode 5: Let’s Do It Together ♥
Justice sees Najimi and Junichirou enter a hotel together, devastating him. Out of frustration, Justice decides to produce a five-hundred-page doujinshi to show Junichirou the error of his ways. Later, Najimi meets a novice doujinshi artist just like her in a comic festival, and becomes her rival.

Episode 6: I’ll Take a Shower First
Justice finally finishes his doujinshi, and immediately makes Junichirou read it. Najimi does not pay much attention to it however, as she and Junichirou are not dating. Later, the gang decide to meet at Kaneru’s apartment, in order to improve their doujinshi skills.

Episode 7: How Wonderful, the Smell of BaLa.
Tsuyuri comes up with a clever plan to help Najimi improve her skills in making doujinshi.

Episode 8: I Can See It All!
A new comic festival is held, and the doujinshi artists grab the opportunity to sell their works. Najimi and Kaneru are eager to know who will sell more, but later learns no one is buying their copy. They decide to look at each other’s work, and try to improve them.

Episode 9: Something Will Slip Out! Dōjin Competition
Najimi and the gang decide to spend time at the beach, only learning afterwards that Justice had advertised for a special doujinshi to be produced by Najimi and Kaneru. Najimi and Kaneru must now work around the clock in order to meet the deadline.

Episode 10: Look at What It Has Become
Najimi and Kaneru scramble to finish their works, as the deadline is approaching fast. Despite the tight schedule, the artists finish their doujinshis, and proceed to sell their work. Luckily, it started to rain, and the people stuck at the rest area decides to buy their doujinshis.

Episode 11: Najimi’s Flying Away
Najimi’s work becomes trending around the Internet. Meanwhile, Junichirou tries to convince his brother Ryuichirou to let Najimi become the replacement artist for his ruined manuscript.

Episode 12: I Want to Keep Doing It, I Want to Do It More
Najimi finally gets a break, as one-hundred of her books are on sale in a local manga shop. This stresses her however, so she buys one copy for herself. After people see Justice with Kaneru who bought Najimi’s work, they are instantly prompter to buy copies for themselves. Following her success, Najimi is offered a chance to become a professional manga artist, although it would mean the end of her doujinshi career. Najimi tries to back out, but Ryuichirou attempts to force her to stamp. With the help of her friends, Najimi avoids Ryuichirou’s plan, and Soura signs in Ryuichirou’s company, making her a professional manga artist.

Anime Rating
7.6/10
263 users rated this.
Similar in these categories.