Home Anime Watch News Forums Sign In
×
This episode is not available. 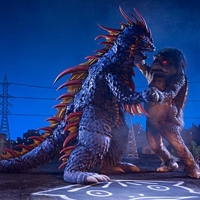 Death Kappa - Ani.ME
KING KONG is dead. GODZILLA is retired. There’s a new monster in town – DEATH KAPPA! The kappa, in Japanese folklore, are water goblins that are closely associated with a certain town in Japan. Unfortunately, as it turns out, that area is also home to a militant splinter group of researchers dedicated to developing amphibious super soldiers based on the kappa of legend. When their experiments result in murders by some escapees, the appearance of an actual kappa, and the triggering of an atomic bomb, the consequences are of epic proportions. A monster arrives in the midst of the nuclear fallout, and Japan’s defenses are helpless against it. Mankind’s only savior is an irradiated water goblin that is on the rampage with death in its eyes!
Ani.ME is an original, 100% legal anime streaming service. You can watch your favorite anime online for free or with an upgraded subscription.
License Information
The show, Death Kappa, is provided by our license partners. The show is licensed from: Media Blasters. All shows hosted by Ani.me are provided by the local distributors with appropriate streaming rights for the region. You can verify with Media Blasters.
Your IP is 44.200.137.63 and country is US.
Return to Death Kappa.