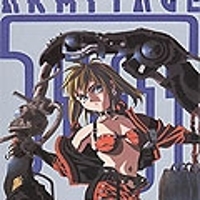 Ross Syllabus is a Chicago cop who lost his partner in a battle with a cyborg. He’s just been transferred to Mars as an expert on robots, but before he’s even left the spaceport he spots a group of suspicious people who turn out to be a madman with cyborg bodyguards. With the help of his soon-to-be partner waiting in the terminal, Naomi Armitage, he stops the cyborgs, but their leader escapes. The plot thickens when they find that the group was carrying the body of a robot who was impersonating a popular country singer. At the MPD office, Ross and Armitage are paired up in the investigation of this unusual crime. As it turns out, someone is murdering robots—rare and illegal Third Types, nearly indistinguishable from humans—who had been living undetected as humans. Ross is already uncomfortable with the investigation, and when he finds out Armitage herself is a Third, he doesn’t know what to make of the situation. Matters are further complicated when he is severely injured in a confrontation with the murder, and has to have large parts of his own body replaced with cybernetics. All the while, the threat of war with Earth looms overhead, and these crimes appear to be related somehow. Armitage becomes a wanted robot, and Ross must choose between her and his prejudices.