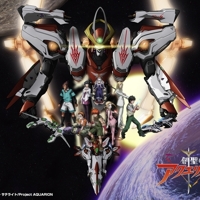 Thousands of years in the past, a powerful race of mythical beings ruled over the humans. They were dubbed as the Shadow Angels; they had powers that enable them to gather the life force of mankind. Because of an unexplained event that took place, these beings laid asleep for 12,000 years.

Unfortunately, a huge catastrophe, also known as the Holy Genesis, happened and it led to the Shadow Angels’ awakening in their city of Atlantdia. For a span of 11 years after this catastrophe, these powerful beings had continued to lay waste on mankind. They started to invade human cities again to gather life force, not just for them, but also for feeding their legendary Tree of Life.

For humanity to have a fighting chance, authorities approved the use of the robotic weapon called Aquarion, along with this, the DEAVA organization was formed. For the Aquarion to function, a pilot of three must synchronize their bodies, hearts, and souls into one – something only a number of people can accomplish. These types of people were dubbed as “Element Users” and the search for them was the world’s first priority.

Genesis of Aquarion is an anime based on Super Robot shows of the 70’s and 80’s created with modern animation techniques written by Hiroshi Onogi and Shoji Kawamori. It was produced by studio Satelight under the direction of Shoji Kawamori and had a total of 26 episodes aired from April 4, 2005 until September 26, 2005. A sequel was announced on February 25, 2011 and was aired in 2012 titled as Aquarion Evol.

Episode 1: “Memories of Heavenly Wings”
After their awakening, the Shadow Angels started to attack human cities again. Silvia de Alisia started to look for the reincarnation of Apollonius, a traitor of their kind. She then met Apollo, a reckless orphan who managed to unlock the true power of mankind’s robotic weapon, Aquarion.

Episode 2: “Beast of Darkness”
Apollo is brought to the headquarters of DEAVA against his protests. While contemplating if Apollo really is the reincarnation of Apollonius, the headquarter is attacked by Holy Angel Toma, who also wants to know the truth and used Cherubim Blumenblatt.

Episode 3: “Element School”
Apollo starts to attend DEAVA’s school for Elements with the intention of saving his friend Baron who is under captive by the Angels. Apollo experiences a hard time in getting along with his classmates, especially with Silvia. But then, the Shadow Angels launches another attack.

Episode 4: “Barefoot Warrior”
Toma informs the other Shadow Angels of his plan to use the Aquarion in restoring their Tree of Life. Meanwhile, a training session for the Elements is held to prove themselves useful.

Episode 5: “King of the Underground Labyrinth”
Apollo flees the Academy to find Baron. Fudo commands the other Elements to get him back and they had to join forces to defeat the Mythical Beast Xibalba.

Episode 6: “To the Other Side of Emotions”
A new Cherubim was dispatched that was able to dodge Aquarion’s attacks. Apollo then manages to unleash Solar Aquarion’s special attack that follows after its enemy.

Episode 7: “Knight of the Crimson Rose”
Sirius, Silvia’s older brother, had believed himself to be the reincarnation of Apollonius and his jealousy for Apollo grows. Toma seeks to make use of this growing jealousy.

Episode 8: “The First Merge”
Tsugumi Rosenmeier finally manages to put to good use her not being able to control her powers in piloting Aquarion against a new Cherubim Soldier.

Episode 9: “The Path to Dreams”
The Mythical Beast Titania is used to put children to sleep endlessly while at the same time, draining them of their life force. The Elements are also put to sleep to counter this, for they have to face the beast in the dream world.

Episode 10: “Stars in the Sky, Flowers on the Ground”
Moroha, another Shadow Angel, confronts and easily defeats Aquarion with help from another Cherubim Soldier. Not destroying it, he leaves. Apollo, Silvia and Sirius joined forces to get their revenge against Moroha.

Episode 11: “Happiness at the Bottom of the Lake”
Reika, an Element that has powers of misfortune, manages to learn how to properly use her powers against the Angels.

Episode 12: “The Time of Amber”
A mysterious feather is discovered by DEAVA researchers. Apollo and Silvia learnt of this and they sneaked into the room containing the feather. They got visions involving Apollonius and his human lover upon touching the feather.

Episode 13: “A 12,000-Year-Old Love Letter”
An attack on DEAVA was launched by Toma and Otoha. Apollo re-encounters his friend, Baron, during battle. He witnesses Baron’s death in despair.

Episode 14: “Shining Shadows”
An invisible enemy is sent by the Angels who then proves to be a handful against the Elements. Apollo joins the fight but soon disappears. In the same moment, Silvia realizes that she has feelings for Apollo and used it to bring him back.

Episode 15: “Aquarion’s First Love”
Element Pierre joins the fray in an enraged state after discovering that his former lover, Esperanza, is going to get married. Because of this, he was not allowed to pilot. A short while after this, the Angels launches an attack on Pierre’s hometown. Pierre soon manages to regain his cool after learning that his fellow elements are having a hard time and assists them.

Episode 16: “Black Mirror”
Element Rena Rune is suspected to be a vampire by her comrades. Toma then decides to take advantage of the confusion.

Episode 17: “Merge to Eat”
The Shadow Angels launch a special microbe that consumes all of DEAVA’s food inventory. Silvia, Tsugumi and Reika decides to fight back after a week of hunger because they got concerned with their bodies.

Episode 18: “Cosplay of the Soul”
Fudo sets an exercise with the Elements making impersonations, hilarity ensues. Soon after, a new enemy capable of mimicking Aquarion’s appearance and abilities appeared and the Elements had a hard time fighting it off at the beginning because of their impersonations.

Episode 19: “Mischief without Malice”
The Elements are taken to an illusionary dimension and while trying to escape it, Toma approaches Sirius, claiming that he is hiding his true self from the others. As this happens, Apollo is grieving over Baron’s death.

Episode 20: “Sound of an Angel’s Feather”
Child Angel Futaba launches an attack against the Aquarion and failed. He then gets captured. To Toma’s anger, he, along with his fellow Shadow Angels and the Elements, hears Futaba’s cries of agony as he gets experimented on.

Episode 21: “Crimson Path”
In Toma’s next attack, he tells the Elements about Silvia and Sirius’ true origins. While the Elements are processing the revelation, he manages to convince Sirius to leave his friends and join the Angel’s side.

Episode 22: “Wings Unseen”
The Elements have a hard time coping with Sirius’ betrayal. Sirius then appears before them as their new enemy.

Episode 23: “Fleeting Wings”
Sirius’ fight with his former comrades gets interrupted by the military, who dispatches a new model of the Aquarion. Sirius then tries to convince Silvia to leave the humans and join his side but Apollo intervenes.

Episode 24: “Heaven’s Gate”
The entire globe gets covered by a mysterious snow which is turning humans into plants. Apollo and Silvia’s quality time together gets interrupted by Sirius who came and kidnaps Silvia. The DEAVA base gets infiltrated by the snow, forcing the Elements to enter the Aquarion to counter.

Episode 25: “Final Battle! Atlantdia”
Aquarion and the military reach the Shadow Angel’s base. Toma restrains the Aquarion and reveals the truth about the reincarnations of Apollonius and Celiane. He then tries to kill the siblings.

Episode 26: “The Day the World Begins”
Toma’s plan to revive the Tree of Life fails. The whole world started to tear itself apart when the tree started to collapse. Apollo, along with Sirius and Toma, boards the Aquarion to sacrifice themselves to save the world. But before this, Apollo declares his feelings for Silvia and promises to unite with her.

gio619vanni @gio619vanni commented on Aquarion [TV]
gio619vanni @gio619vanni
Jan 31, 17 at 12:36am
I like the scene from the first episode when apollo falls down and the sun makes it seem like he got wing and the music its great
Copyright © 2023 AnimeCon.org and Ani.ME
Your use of this website is subject to the terms and conditions and privacy policy.