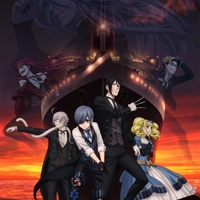 An animated film adaptation of the manga was announced on the official anime’s Twitter account on October 10, 2015, with the cast from the television anime returning to reprise their roles in the film.[