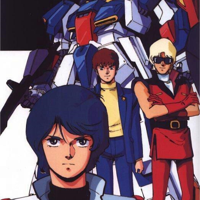 Set in the year Universal Century (UC) 0087, eight years after the events of Mobile Suit Gundam (0079), the series follows a rebel group called the Anti-Earth Union Group (AEUG) as they try to defeat the Titans, an elite task force of the Earth Federation designed to hunt down Zeon remnants but which ruthlessly kills anyone demanding equal rights for the space citizens in cold blood.