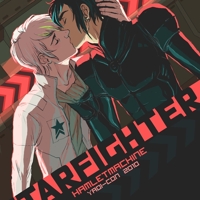 In the distant future, humanity is divided into two races! They are constantly warring with each other for dominance of space. The two races of which I speak are gay rapists, and gay rape victims.
Okay, giggles aside, in Starfighter, the human race is losing a war with some unseen/unexplained threat called the Colterons. The human military is broken down into two groups: navigators and fighters. There is one navigator and one fighter per ship.Navigators are supposed to be the smart ones who pilot the ships. They also are all waify, tiny, oversensitive, girly uke boys. Navigators are also perceived as the “better” of the two groups of military homos for some contrived reason. They’re too precious and beautiful to socialize with their military partners, yet it is mandatory for them to dorm and work together constantly. (By the way, every single dorm has two double beds and a private bathroom ‘cause, we all know, that’s how military barracks roll.)