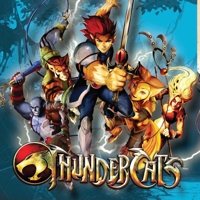 On the planet known as Third Earth, the Cats have lived and thrived for generations in the kingdom of Thundera. The Cats are led by Claudus, with his son and heir Lion-O. However, one night the kingdom is attacked by the Lizard army led by the evil sorcerer Mumm-Ra. With them, the Lizards bring technology (a concept unfamiliar to the Cats). Because of this, Thundera is destroyed, Claudus is killed by Mumm-Ra, and the rest of the Cats are enslaved. A small band of surviving Thunderians led by Lion-O (who wields the powerful Sword of Omens) flee the destroyed city in order to seek out the Book of Omens which is said to have the knowledge needed to defeat Mumm-Ra. Once they find it, the ThunderCats realize that in order for them to defeat Mumm-Ra, they must unite all the different species living on Third Earth. The ThunderCats also discover that they have to find three stones of power which if found by Mumm-Ra will give him power to become the most powerful being in the universe.