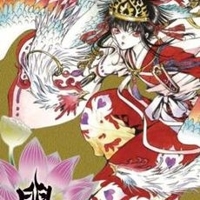 Gate 7 follows Chikahito Takamoto, a secondary school student whose strong interest in history brings him to Kyoto, where he meets a beautiful childlike warrior named Hana, who fights supernatural enemies with the aid of Tachibana and Sakura, two young men with magical powers of their own. The trio of Hana, Tachibana, and Sakura are members of the Urashichiken Hanamachi, a secret society dedicated to waging battle against otherworldly creatures that appear in Kyoto.As Chikahito soon learns, the Urashichiken’s battles go back to the Sengoku era in Japan, when warlords and other key figures attempted to defeat their rivals by forming blood contracts with powerful spiritual beings known as Oni. Since then, many of masters of the Oni have reincarnated in the present, with the Urashichiken’s current leader being the reincarnation of Toyotomi Hidetsugu, and they struggle to find the long-missing body of Oda Nobunaga in order to obtain the most powerful Oni of all. Chikahito inexplicably finds himself in the midst of the otherworldly spaces where the battles are fought as he begins his new life in Kyoto.