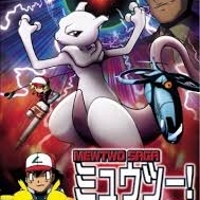 Mewtwo, his heart having been softened by the selfless example of the human named Ash Ketchum back in his birthland in the eastern Kanto region, has now traveled to the western region of Johto in search of a location that is unreachable by the prying eyes and harsh judgments of humans for the sake of his band of cloned Pokémon, with whose welfare Mewtwo is solely concerned. He eventually finds the perfect hideaway: a huge mountain named Mt. Quena, surrounded by steep cliffs that are practically impossible to scale, but in its top is a forest and a freshwater lake that makes for a near-utopia for all the Bug Pokémon living there. This is a perfect fit for Mewtwo’s band, so thus they settle in the top of Mt. Quena and begin a new, safe life, with Mewtwo watching over as their guardian, as he feels they cannot belong in the world as they were not born in it (Interestingly enough, he seems particularly close to the Pikachu and Meowth clones, possibly reflecting how important their templates were in his change of heart).