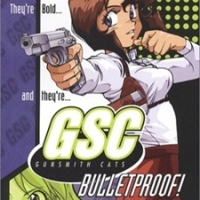 19-year-old Irene “Rally” Vincent operates the titular “Gunsmith Cats” gun shop but also works as a bounty hunter which is the impetus behind many of the stories. She is assisted in both activities by her housemate, former prostitute “Minnie” May Hopkins. Rally is an expert combat shooter and marksman with just about every firearm in existence, as well as a brilliant driver. May is an explosives expert, knowing the inner workings of and many uses of all manner of explosive devices. Teenage ex-burglar and lock-picker Misty Brown later joins the team and there is also Becky Farrah, a top, if expensive, source of information on underworld activity.

Bounty hunting has of course led Rally to making many enemies, most notably Gray, the leader of gangsters whose use of armaments, including bombs, have likened them to terrorists; and Goldie Musou, a leading figure in the Mafia who uses drugs to manipulate people to the point that they can be brainwashed into killing their nearest and dearest. Bean Bandit, a man who specializes in delivering illegal goods, often features as an alternate ally or enemy — depending on the behavior of his clients, most of whom are being hunted by Rally.