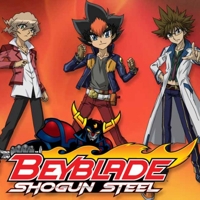 Seven years have passed since the God of Destruction met his end at the hands of a Legendary Blader. A new era of Beyblade has begun, bringing with it new Blades. When Zero Kurogane witnessed the final battle with the lord of destruction years ago, a fire began to burn within him to push forward to a new future. While Zero is the champion in his hometown, he wants to test himself and seeks out greater opponents, heading to Metal Bey City, Gingka’s hometown. When Zero arrives and discovers that Gingka is nowhere to be found, he learns that bladers from all over the world have come to test themselves against the Cyclone Bey stadium. Wanting to push his skills forward, Zero takes part in the new era of Beyblade, testing his might against the Cyclone stadiums.

Alice @beyblade commented on Beyblade Shogun Steel [TV]
Alice @beyblade
Jul 17, 21 at 11:13am
3-2-1 Let It Rip!!!
Copyright © 2023 AnimeCon.org and Ani.ME
Your use of this website is subject to the terms and conditions and privacy policy.