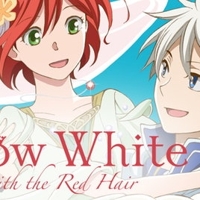 Shirayuki is a normal herbalist citizen in the kingdom of Tanbarun with one rare unique feature: her beautiful red hair. Due to her unusual hair color, Shirayuki was raised to always be careful of showing her hair in new surroundings and grew to be an independent young woman. However, her hair gets her noticed by Prince Raj, who orders her to become his concubine. Refusing his orders, she cuts her hair and leaves it behind as part of what he wanted and escapes to the neighboring kingdom of Clarines. On her way there, she meets and befriends Prince Zen and his two aides Mitsuhide and Kiki. When Zen is poisoned by an apple meant for Shirayuki gifted by Raj, Shirayuki successfully obtains the antidote and decides to accompany the trio to Clarines. Shortly thereafter, Shirayuki passes an exam for a position to train in the palace as a herbalist. Shirayuki and her friends find a place in Clarines and carries out her duties as a court herbalist. Over the course of the story, Zen and Shirayuki begin to fall in love with each other and eventually begin a romantic relationship, in spite of opposition due to their difference in social status.