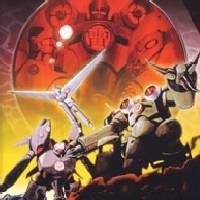 October 1941, as the second World War threatens to destroy the civilized world, an unforeseen complication suddenly occurs. An alien invasion! Despite the sudden appearance of these extraterrestrial aggressors, the Axis and Allies continue their destructive conflict. Only the Kishin Corps and their giant Geo-Armor Robots (a.k.a.: Kishin), developed from a captured alien robot soldier, stand between the Earth and total annihilation!