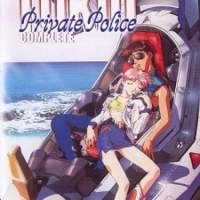 In the future, Tokyo is no longer the capital of Japan, that honor returned to the ancient city of Kyoto. Although still a principle trading center, much of the city – especially the once-fashionable Ginza district – has fallen into such a great morass of crime, the regular police is overwhelmed from all the extra work. As a result, many of the well-to-do citizens of the city often contract private security firms for their own protection. These firms are also deputized by the Tokyo police to aid them whenever a major situation develops.

Noriko Ibuki is employed with the Tokio Private Police, one of these private security firms, and in the opening is stationed in Ginza, which is now a crime-ridden slum. Years before, she was a high school student whose first sexual encounter went wrong; her boyfriend was very rough on her, and what resulted was close to rape. As a result, she doesn’t like to indulge in sex. In the face of a normal day, Noriko’s tomboyish looks (short hair and a small bustline) often get her mistaken for a man, which irritates her greatly.