The Legend of The Legendary Heros [TV] 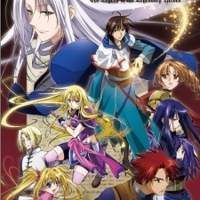 Ryner Lute is a lazy student of the Roland Empire Royal Magician’s Academy. One day, the Roland Empire goes to war against their neighboring country Estabul, and Ryner loses his classmates in the war. After the war, Ryner sets out on a journey to search the relics of a “Legendary Hero” at King Sion Astal’s command and finds out that a deadly curse is spreading throughout the continent.