Now and then here and there [TV] 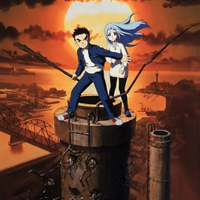 While on top of a smoke stack in an industrial park, the main protagonist Sh?zo “Shu” Matsutani is transported to another world after attempting to defend an unknown girl, Lala-Ru. Lala-Ru possesses a pendant containing (somehow) a vast reservoir of water and she has the ability to control that water.

In this new world, Shu is beaten and interrogated. He is forced to join an army of children and pillage in search of water. He wishes to return home and also find the mysterious girl whom he tried to protect.

Much of the series deals with serious moral issues relating to war, the consequences of war, rape, democide, human brutality and the exploitation of children.