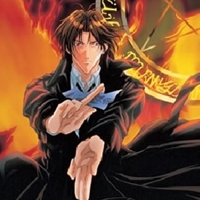 Asato Tsuzuki is a shinigami with 70 years’ worth of experience. He has the power to call upon twelve shikigami, mythical creatures that aid him in battle. The shikigami reflect actual historic religious beliefs—such as Suzaku and Byakko. The manga portrays Tsuzuki’s relationship with the shikigami in much more detail. Tsuzuki is the senior partner of the Second Division, which watches over the region of Ky?sh?.

In the anime, the story begins when Chief Konoe, the boss, and the other supporting characters begin talking about murders happening in Nagasaki. The victims all have bite marks and a shortage of blood, which leads to the case being dubbed “The Vampire Case”.

After some food troubles, Tsuzuki travels to Nagasaki with Gushoshin, a flying creature/helper who can speak, and together they do a bit of investigating. The rule is that shinigami are supposed to work in pairs, and until Tsuzuki meets up with his new partner, he needs someone to watch him. However, Gushoshin gets held back by groceries, and Tsuzuki is on his own again.

While exploring Nagasaki, Tsuzuki hears a scream and has a literal run-in with a strange woman, who leaves blood on his collar. Coming to the conclusion that this is a sign that the woman might be a vampire, Tsuzuki tries to follow her, coming into a church called Oura Cathedral. The church scene is the first encounter between Tsuzuki and the antagonist of the story, Muraki.

Doctor Kazutaka Muraki is painted as a pure figure in his first scene, with much religious and color symbolism. He meets Tsuzuki with tears in his eyes, and Tsuzuki, a bit thrown off by this, manages only to ask if Muraki has seen a woman go by. Tsuzuki leaves when Muraki says no one has been in the church.

From there, Tsuzuki continues through Nagasaki, into the area of the city known as Glover Garden, where he is held at gunpoint from behind and told not to move. His attacker tells him to turn around, and when he does, he discovers a young man glaring at him. Tsuzuki calls him a kid and is nearly shot, saved only by his helper, Gushoshin.6 From there, Tsuzuki learns that the boy is Hisoka Kurosaki, his new partner, and the rest of the story is heavily based on character development and the relationships between characters.

Later in the Nagasaki Arc (the first fourth of the anime series, and the first collection of the manga), Hisoka gets kidnapped by Muraki, and the truth about his death is revealed to him. Tsuzuki rescues him after his “date” with Muraki,7 and the entire series begins following the relationship between these three characters, supported and embellished by the rest of the cast. Later in the series, Hisoka decides he wants to capture a shikigami for himself, creatures that live in the imaginary world that help shinigami in battle.

The City of Nagasaki is shown throughout the series. Many tourist sites such as The Peace Memorial, Glover Garden, and Oura Cathedral are shown.