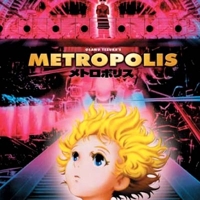 Metropolis (??, Metoroporisu?) is an anime film released in Japan in 2001 and loosely based on the 1949 Metropolis manga created by the early Osamu Tezuka and also a loose adaptation of the famous silent German film of the same name. The film had an all star production team including renowned anime director Rintaro, Akira creator Katsuhiro Otomo as script writer, and animation by Madhouse Studios with conceptual support from Tezuka Productions.

Metropolis is a futuristic city-state where humans and robots uneasily coexist. While the robots are heavily segregated throughout the city’s districts and are destroyed for straying from their designated areas, many impoverished humans complain that the robots leave them unemployed. Duke Red, the de facto ruler of Metropolis, has overseen the construction of a towering skyscraper called the Ziggurat, which will allow mankind to further extend its power across the planet. During the Ziggurat’s opening ceremony, a wayward robot disrupts the event, only to be shot down by Rock, Duke Red’s adoptive son and the head of the Marduk Party, an anti-robot vigilante group.

Private detective Shunsaku Ban and his nephew, Kenichi, travel to Metropolis from Japan with an arrest warrant for Dr. Laughton, a mad scientist wanted for illegally trafficking human organs. Dr. Laughton has been secretly hired by Duke Red to construct a robot modeled and named after Red’s deceased daughter, Tima, to sit on the throne within the Ziggurat and “complete” it. Rock, however, does not want a robot to overshadow his adoptive father, shooting Dr. Laughton and setting fire to his laboratory. Investigating the fire, Shunsaku enters the burning factory and discovers the dying Laughton, who gives him his notebook. Kenichi, meanwhile, encounters Tima, who was newly activated during the chaos. The two fall into the sewers and are separated from Shunsaku.

While Shunsaku searches for his nephew, Kenichi and Tima search for a way out of the bowels of the city. During this time, they grow close to each other as Kenichi teaches Tima the basics of language and grammar. Neither of them, however, are aware that she is a robot. The two—who are hunted relentlessly by Rock and his Marduk subordinates—encounter a group of unemployed human laborers who attempt to stage a revolution against Duke Red and the robots. The president of Metropolis attempts to use the revolution to justify arresting Duke Red for treason, only to be betrayed and assassinated by his military commander, who had turned to Duke Red. This allows Duke Red to impose martial law and suppress the revolution.

Kenichi reunites with Shunsaku, only to be cornered by Rock, who manages to dispatch both Shunsaku and Kenichi, and reveals to Tima that she is a robot. However, Rock is then confronted by Duke Red, who disowns him and strips him of his command of the Marduks for trying to kill Tima. Duke Red takes Tima away to the Ziggurat while Shunsaku and Kenichi are treated. Still determined to dispose of Tima and regain his father’s affections, Rock kidnaps and deactivates Tima, who is now confused about her identity as either a human or a robot. Shunsaku rescues and, after following instructions left in Laughton’s notebook, reactivates Tima. The two discover that Kenichi is being held within the Ziggurat, and are captured by Duke Red and the Marduks on their way to save him.

Inside the Ziggurat, Tima questions Duke Red about whether or not she is a human or a robot; Duke Red tells her she is a “superhuman” destined to rule the world from her throne inside the tower. However, Rock enters the throne room disguised as a maid and shoots Tima, exposing her circuitry through the bullet wound. Upon realizing that she is a robot who has been misused, Tima goes insane and assimilates with the Ziggurat, ordering a biological and nuclear attack on humanity as revenge. Kenichi confronts Tima in an attempt to free her, while Duke Red is attacked by revolting robots. Rock, deciding that he would rather want his father to die by his own hands instead of those of robots, kills Duke Red and himself by activating the Ziggurat’s superweapon, which causes the Ziggurat to collapse.

As the fortress crumbles, Tima advances on Kenichi and attempts to kill him, but they nearly fall off the girders outside. Kenichi attempts to pull Tima to safety as she dangles on a wire. Tima begins to remember the time Kenichi first taught her grammar and asks Kenichi, “Who am I?” before she slips from his grip and falls to her death. The Ziggurat explodes, destroying Metropolis. By the next morning, Kenichi searches the ruins of Metropolis and encounters a group of robots that have salvaged some of Tima’s parts in a possible attempt to rebuild her. Kenichi decides to stay behind to recover more of Tima’s parts as Shunsaku and several other human survivors are evacuated. Later, deep within the rubble of the city, a radio plays Tima’s voice saying, “Who am I?”

After the credits end, a picture is shown, depicting a shop named “Kenichi and Tima’s Robot Company” with Tima visible in a window of the shop, implying that Kenichi managed to rebuild her and they set up the shop together.