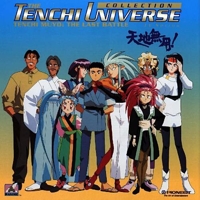 Galaxy Police offiver Mihoshi’s patrol ship is in hot pursuit of space pirate Ryoko, who is aboard her ship Ryo-Ohki. The two starships fight a space battle, and both are badly damaged.
Tenchi sees two objects fall from the sky, which crash in different locations near the lake. He goes to investigate and arrives at the site where Ryo-Ohki has crashed. In the wreckage he sees a woman with blue spiked hair: Ryoko.