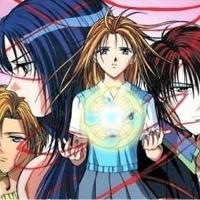 Teenager Aya Mikage and her twin brother Aki are called to their grandfather’s home for a special celebration for their sixteenth birthday. Instead they find themselves the victims of an ancient family ritual.
Aya is found to be the reincarnation of a celestial maiden and upon reaching the age of sixteen her body is able to bring forth a powerful, celestial maiden called Ceres. When she transforms into Ceres, Aya obtains supernatural powers and often forgets what she has done during the transformation, resulting in a double personality. According to the legend, if left to live, the reincarnation of Ceres will bring ruin upon the Mikage family. Aya quickly finds herself assigned a death penalty by her own family.

This was my first manga and the reason that I'm an otaku...