Ballad of a Shinigami [TV] 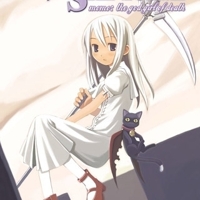 Ballad of a Shinigami primarily centers around a young-looking girl named Momo (?) who is a shinigami, or death god. Momo is clad in all white, along with having long white hair, and as a god of death, she leads deceased souls to the other side. She carries with her a large scythe and an ID card which helps to facilitate in her identification as a shinigami; her shinigami ID number is A-100100. Momo is different from other shinigami because she tries to ease the suffering of the people she encounters whether they be living or already dead, such as conveying messages from the dead to the living. She is also known to cry a lot, and she says that she cries for the dead because they no longer can. Accompanying Momo is a talking black cat familiar named Daniel (??, Danieru?) with a bell around his neck and bat-like wings who helps Momo out. The living frequently hear the ringing of Daniel’s bell when Momo and Daniel are nearby. Daniel has a calm character and does not show as much sympathy to humans as Momo, but is still patient with them. In the TV drama, Daniel is portrayed as a young boy rather than a cat. The story follows Momo and Daniel as they interact with the living and usually consists of them changing something sorrowful for the living.

Another shinigami featured in the series is also a young-looking girl named An (?) who is clad in all black, along with having black hair. Like Momo, she shows outward emotion towards the living and dead, but An has a cruel personality and does not give mercy to anyone. Despite the fact that shinigami are meant to transport souls to the other side, An chooses to terminate the souls of the people she kills. Among shinigami, she is very powerful, and is referred to as a special type of shinigami. Her shinigami ID number is A-99. Accompanying An is a talking gray cat familiar named Nicolas (?, Nikorausu?), but is referred to as Nicol (?, Nikoru?) for short. Before starting to work with An, Nicol had once been very close friends with Daniel.