Those Who Hunt Elves II [TV] 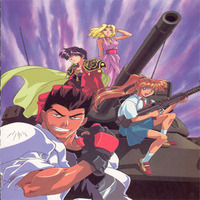 “Those Who Hunt Elves” returns with a whole new set of adventures featuring Junpei, the karate kicking dunderhead, Ritsuko, the gun toting schoolgirl, Mihke, the cat-possessed battle tank, and Airi, the gifted actress. This motley crew share but a single thought… to track down young female elves and strip them naked. If they can find enough elves with spell fragments on their bodies, our guys can return to their own world at last.
That is, unless their main ally Celcia, an elf elder, doesn’t screw up again. Or unless a talking wolf, giant panda or some other bizarre creature doesn’t get in their way. Or if the Elven Invertigative Commitee doesn’t lock them up because so many outraged elves have been filling complaints!
It’s an impossible job, but if anybody can pull it off, it’s Those Who Hunt Elves!