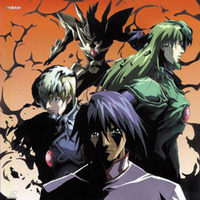 On the year 2007, Professor Takuma Nekasa of Kubere has discovered a way to unlock a human’s full potential. However, the discovery led to World War III, a tragic event which took countless innocent lives.

In an attempt to change the course of history, three scientists in the name of Gawl, Ryo, and Koji have traveled back in time. Unfortunately, they arrived in a timeline that was later than intended.

To make matters worse, the trio must now fight against the Generators that have pursued them, and a mysterious person who prefers the future as it is. The clock inevitably ticks, and the world’s future hangs in the balance.

Generator Gawl is a sci-fi adventure anime series written by Hidefumi Kimura and Fumihiko Shimo. Produced by studio Tatsunoko Production, the series aired a total of 12 episodes between October 6, 1998 and December 22, 1998.

Episode 1: The Visitors
Koji, Ryo, and Gawl successfully travels back to the past, and defeats the Generator that came with them. Koji and Ryo decides to hack into the city’s system to search for their objective’s location, while Gawl wanders off alone in search for food. However, Gawl is detained when a girl named Masami accuses him of being the “fast food stalker” after seeing him stare blankly into the restaurant. Fortunately, Koji and Ryo arrives to help him. With the fabricated story of their orphanage burning down, the trio gains new IDs and a place to stay.

Episode 2: Flowers & Girls
Koji, Ryo, and Gawl are admitted into Oju Academy. There, they meet Masami’s friends and their enigmatic assistant instructor, Ryuko Saito. Absent from their knowledge and suspicion, Ryuko Saito secretly knows more about the boys and their mission. Later, Gawl confronts a Generator at a construction site.

Episode 3: Curiosity
The trio is confronted by a Generator during their attempt in extracting information from the school’s computer system.

Episode 4: Future Memory
Ryo could not help but worry about his disturbing dreams regarding Generators and his research with Gawl. After being excused from class, he decides to use this chance to sneak into Prof. Takuma Nekasa’s lab. However, he encounters the professor there after discovering his research.

Episode 5: The Best of Both Worlds
The trio experience their very first school festival, and Masami is very eager to win the cooking contest. However, their fun is cut short by Ryuko Saito, who insists that they should attend a biology symposium instead. Meanwhile, Gawl is occupied in a fishing contest together with a mysterious person.

Episode 6: Chameleons
Gawl engages a Generator in battle, however his opponent manages to flee into the city. They later resume fighting at a building rooftop, and falls into an alley where Masami and Natsume are standing.

Episode 7: Secrets & Lies
While spending a relaxing time at the baths, the trio spot another signal of a Generator’s arrival. Gawl immediately goes to fight him, but Masami gets caught up in the fight. Later, Masami confronts Gawl about his secrets, who then moves out to avoid revealing his identity.

Episode 8: Renegade
Ryo reminds himself of their objective and reminiscences about his scientist days.

Episode 9: Storms
Ryo and Koji confront Professor Takuma, but Ryuko Saito finally reveals herself as the true threat and villain.

Episode 10: The Janus
The guys search the lab for anything that may help them stop Ryuko and her plans. Meanwhile, Masami is cooking up a feast, expecting for the guys to return.

Episode 12: Out of Time
The trio, together with their new comrades, make a final stand to stop Ryuko Saito and change the course of history.

Story: If you are a fan of time travel and sci-fi stories, then you might just like Generator Gawl. There might be some few plot holes, but nevertheless it all flowed beautifully.

Characters: The characters might be cliché, but are still lovable throughout the series. Their interactions and witty dialogues provide good comedy, and they explain time travel without diving too deep.

Animation: The animation is excellent. The character designs are well-made, and the fight scenes are very fluid. Despite its age, it can be said that Generator Gawl’s animation can still compete against newer action anime.

Sound: The show could have used more improvements in this area. There are many scenes without any background music, and the themes are not as catchy as those from other anime.

Overall: Despite a few lapses, Generator Gawl is still worth a watch. The action scenes are entertaining, and there is a good blend of comedy.