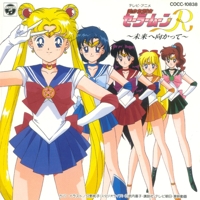 The second season of the Sailor Moon anime series, titled Pretty Soldier Sailor Moon R (????R Bish?jo Senshi S?r? M?n ?ru?), was produced by Toei Animation and directed by Junichi Sato and Kunihiko Ikuhara. According to the booklet from the Sailor Moon Memorial Song Box,1 the letter “r” stands for the word “romance”. Like the rest of the series, it follows the adventures of Usagi Tsukino and her friends. The first 13 episodes consist of the “Makaiju arc”, while the “Black Moon Clan” arc adapts the manga series by Naoko Takeuchi.After defeating the Dark Kingdom, Usagi and the Sailor Soldiers encounter the Makaiju aliens. Afterwards, the Black Moon Clan stars planning an operation to steal energy at the Star Points of the future Crystal Tokyo, forcing the Sailor Soldiers to confront them with her daughter from the future, Chibiusa.