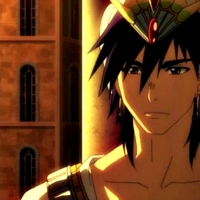 Adventure of Sinbad (?????, Shindobaddo no B?ken), Sinbad no Bouken, or Magi – Sinbad no Bouken is a spin-off/prologue to Magi manga series, written by Shinobu Ohtaka and illustrated by Yoshifumi Ohtera. A 70 page prototype of this series was released on January 30, 2013, together with the first DVD & Blu-ray, and told the story of Sinbad’s conquest of the first Dungeon, Baal. The full series began serialization on May 8, 2013 in Weekly Sh?nen Sunday, but was moved to Ura Sunday in September 2013, in a biweekly webcomic format. It tells the story of Sinbad’s adventures since he was a child.