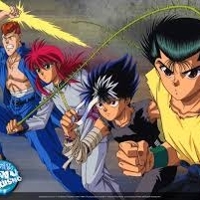 YuYu Hakusho (?? Y? Y? Hakusho?, lit. “Ghost Files” or “Poltergeist Report”) is a Japanese manga series written and illustrated by Yoshihiro Togashi. The name of the series is spelled YuYu Hakusho in the Viz Media manga and Yu Yu Hakusho in other English distributions of the franchise. The series tells the story of Yusuke Urameshi, a teenage delinquent who is struck and killed by a car while attempting to save a child’s life. After a number of tests presented to him by Koenma, the son of the ruler of the afterlife Underworld, Yusuke is revived and appointed the title of “Underworld Detective”, with which he must investigate various cases involving demons and apparitions in the human world. The manga becomes more focused on martial arts battles and tournaments as it progresses. Togashi began creating YuYu Hakusho around November 1990, basing the series on his interests in the occult and horror films and an influence of Buddhist mythology.

poland1 @poland1 commented on Yu Yu Hakasho [TV]
poland1 @poland1
Dec 31, 17 at 4:50pm
Everyone excited for the new third season?!?!!?
Copyright © 2023 AnimeCon.org and Ani.ME
Your use of this website is subject to the terms and conditions and privacy policy.