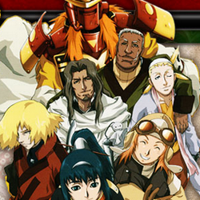 The story is set on the far future, where human enhancement is possible through integrating machines to one’s living cells. After a long period of war, the winning mechanized samurai proceed to banditry, and continuously terrorize the small villages in the countryside.

After suffering several attacks from the Nobuseri (mechanized bandits), the elder of Kanna village is left with no choice but to employ help from samurai. Villagers were sent to the city to hire samurai for protection, but the search was nothing if not a challenge, as they had no money and can only pay in rice. However, despite these odds, the villagers were able to hire several samurai who were willing to protect the village.

These seven samurai with their own specialties are now tasked to defend Kanna against the Nobuseri, and the corrupt government that powers them.

Samurai 7 is a steampunk, adventure anime television series based on Akira Kurosawa’s 1954 movie entitle Seven Samurai. Produced by studio Gonzo, the series aired a total of 26 episodes between June 12, 2004 and December 25, 2004. Each episode of the series costed an estimated $300,000 to produce.

Shimada Kambei
Kambei specializes in strategy and leadership, and was the first samurai to be hired. Wise and skillful, he is a survivor of many battles, despite being often on the losing side.

Okamoto Katsushiro
Katsushiro is a young, ambitious, but inexperienced samurai. He believes in the way of the sword, and recognizes Kambei as his sensei. He is the fifth samurai that was hired.

Katayama Gorobei
A veteran of war like Kambei, Gorobei is also a skilled samurai. He possesses very sharp senses, demonstrated by his skill in plucking flying projectiles mid-air. He was the second samurai that was hired.

Shichijori
The fourth samurai that joined was Shichijori, a spear-wielding samurai who fought side-by-side with Kambei during the Great War. Although owning a successful inn and having a beautiful fiancée, Shichijori temporarily leaves to join Kambei in battle once again. His prosthetic left hand has a grappling hook.

Kikuchiyo
Initially a peasant farmer, Kikuchiyo became a mechanized samurai to help others in need. He is loyal to Kambei, and is greatly loved by the villagers of Kanna. He wields the biggest sword among the seven samurai, and was the last samurai hired to protect Kanna.

Hayashida Heihachi
Heihachi is the third samurai that agreed to help Kanna, and specializes in mechanics. He is also a veteran of the Great War, but worked as an engineer far from the battlefield, and thus he avoids direct combat as much as possible. He harbors great hate towards traitors, as he was once also one that resulted the death of his unit.

Kyuzo
Kyuzo specializes in dual wielding, and is the sixth samurai. He is mostly silent, and only joined the group so that he can fight Kambei to the death after they save Kanna.

Episode 1: The Master (The Murderer)
The samurai are defeated by the Nobuseri after a long war. The Nobuseri now abuse their power by terrorizing small villages, taking their supplies and sometimes their women. The village of Kanna decides to seek aid from samurai.

Episode 2: The Pupil
Kirara, one of the villagers tasked to look for samurai, is kidnapped by Ukyo. With the help of the first two samurai they have hired, Rikichi and Komachi try to save Kirara.

Episode 4: The Loner
Kambei recruits Gorobei. Ayamaro, father of Ukyo, sends assassins to kill the group. However, the assassins are skillfully eliminated. They were then confronted by Kyuzo, who ended up joining the group after failing to defeat Kambei.

Episode 5: The Drifter
After several days of fruitless search, the group stumble upon Heihachi who was chopping wood. He is a skilled samurai and engineer, but prefers to eat than fighting.

Episode 6: The Fool
The group of samurai are framed for murder of government officials. They escape with a runaway train.

Episode 7: The Friend
Kambei heads to his old friend Shichiroji, who later joins them after helping the group escape from their pursuers.

Episode 8: The Guardians
The group arrives in Metal City, home of the mysterious Guardians.

Episode 10: The Journey
With the Nobuseri hot on their tail, Kambei splits the group into three, each taking a different route to Kanna village. Meanwhile, Kirara still has her suspicions with Kyuzo, and what his true intentions were. She was soon proven wrong, after Kyuzo saved her from her death.

Story: Samurai 7 starts out very strong, and continues to get better as the show progresses. The story is well written, and its elements seamlessly work together. However, if you love happy endings, then you won’t find it here.
Animation: Everything is beautifully animated. From the complex mechanical weapons to the detailed cities, Samurai 7’s animation is superb. The fighting scenes are action-packed, and fluid.
Sound: The sound does its job well, and that is to accompany the animation without attracting too much attention.
Character: The characters are outstandingly well-written. Each are unique, and each have well-paced development throughout the series, especially the seven samurais.
Overall: Samurai 7 is a must watch anime, as the story and characters stand out from other anime. Despite being 26 episodes, everything was well fitted, and the series is perfectly “complete”.