Ghost in the Shell: Arise [Special] 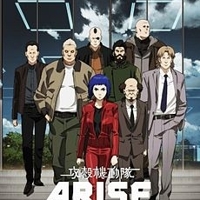 is a four-part OVA series that serves as a re-imagining of Masamune Shirow’s Ghost in the Shell. The four-part series features new character designs and is directed by Kazuchika Kise, screenplay by Tow Ubukata, and music by Cornelius. Funimation has acquired the rights for the series for a North American release. Arise features a brand new voice cast, compared with the casts of the original film and Stand Alone Complex television anime series. Maaya Sakamoto replaces Atsuko Tanaka as the voice of Major Motoko Kusanagi, Sakamoto having only previously voiced the Major as a child.2 Other changes to the cast include Kenichirou Matsuda as Batou, Tarusuke Shingaki as Togusa, Ikyuu Jyuku as Chief Daisuke Aramaki, Tomoyuki Dan as Ishikawa, Takuro Nakakuni as Saito, Y?ji Ueda as Paz, and Kazuya Nakai as Borma.4 Miyuki Sawashiro will provide the voice of the series’ think tanks the Logicoma (?? Rojikoma?), short for Logistics Conveyer Machine (??????? Rojisutikkusu Konbeiy? Mashin?). The Logicoma will also feature in anime shorts included on the Blu-ray releases titled Logicoma Beat (?? Rojikoma B?to?).