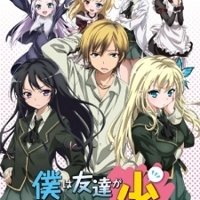 Kodaka Hasegawa is a recent transfer student to St. Chronica’s Academy, a private Catholic school. As with every other school he has ever attended, he finds it difficult to make friends there because of his mix of brown-blond hair (inherited from his deceased English mother) and fierce-looking eyes, which make him look threatening to his prejudiced schoolmates.
One day, Kodaka accidentally comes across the equally solitary and very abrasive Yozora Mikazuki as she converses with “Tomo”, her imaginary friend. Realizing that neither of them have any social lives, they decide that the best way to improve their situation is to form a club, the Neighbor’s Club, for people with no friends like themselves.
Other students join the club, starting with the school’s attractive but arrogant idol Sena Kashiwazaki, who has no female friends of her own and who only has guys who act like her slaves. The next to join is Yukimura Kusunoki, a feminine underclassman who idolizes Kodaka and wants to become manlier. Rika Shiguma is a perverted underclassman and well-known scientific genius with fujoshi tendencies who joins the club after Kodaka rescues her from a laboratory accident. Finally, Kodaka’s younger sister Kobato joins; she dresses in Gothic lolita clothes and thinks she is a vampire