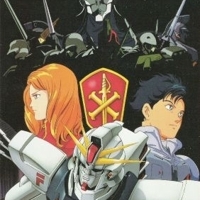 Universal Century 0123. After a generation of peace, the Earth Federation has begun to build new space colonies to house humanity’s growing population. But a new force, the aristocratic Crossbone Vanguard, plans to seize the colonies of the newly constructed Frontier Side for itself.
As their home becomes a battlefield, a handful of young civilians struggle to escape the conflict. To save his friends and family, the reluctant warrior Seabook Arno becomes the pilot of a new Gundam which bears the code name F91.