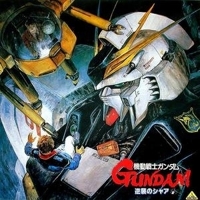 Universal Century 0093. After nearly fifteen years, the rivalry between Newtype pilots Char Aznable and Amuro Ray reaches a climax. For years, Char has watched as those who live on Earth have oppressed those living in space. Now, he is prepared to make a final stand. His plan is to make Earth uninhabitable and force all of humanity to live in space.
However, opposing Char is his archrival, Amuro Ray and his allies. But as they once again come into conflict over politics and philosophy there is something much more personal that drives the rivalry between these two men.