Pokemon Rangers and the Temple of the Sea [Movie] 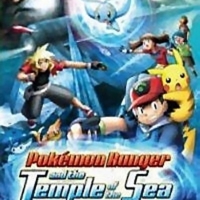 One night out at sea, a mysterious Pokémon egg washes into a massive ship led by Phantom the Pirate. As Phantom is about to hatch the egg for his desires, one of his ship employees steps in, snatches the egg, and escapes the ship, being none other than a Pokémon ranger using his capture styler to make a clean getaway with a Mantine.
Meanwhile, Ash, Pikachu, May, Max, and Brock find themselves lost on a scorching hot day without any water supply on hand, they run into a girl named Elizabeth who is training water type Pokémon in psychic powered water bubbles levitating in midair. Her and her mother Meredith, her father Kyle, and her grandfather Ship greet them and offer them water, and a show, for which they are a travelling entertainment team called the Marina Group. While there, the egg seen at the beginning of the film is exposed by their Pokémon Buizel in a small tank. That night May has a dream that she was underwater and taken to an temple by a small excited Pokémon.