Pokemon: Lucario and the Mystery of Mew [Movie] 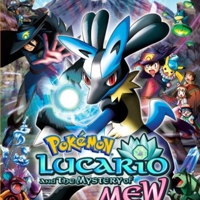 Lucario and the Mystery of Mew opens over the foggy landscape of Rota, with Ho-oh flying overhead. Then it goes to Lucario, who is jumping from rock to rock. Suddenly he stops. He surveys the landscape, but sees only fog and rock. He then closes his eyes and calls upon the aura. He sees the aura of everything, and sees the aura past the fog. In one direction, he sees a giant army of men and Pokémon dressed in red armor. He releases the aura and turns in the other direction. He closes his eyes and calls upon the aura once more. He sees the aura past the fog and sees another giant army in the opposite direction as the first one. These men and Pokémon were wearing green armor. They were both marching toward each other for a horrible battle.