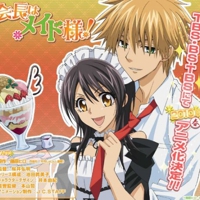 Once an all-boys school, Seika High, a renowned school full of reckless and filthy students, has recently become a co-ed school. However, with the female population still remaining a minority even after the change over the recent years, Misaki Ayuzawa takes it into her own hands to reform the school and allow a chance for the girls to feel safer in the rough environment. Even the teachers are on her side. Training, studying and even becoming the first female student council president of the school, Misaki has gained a reputation, among the male students body as an uptight boy-hating demon dictator and as a shining hope for the teachers and fellow female students. However, despite her tough-as-nails appearance, she secretly works part-time at a maid café in order to support her family. Unfortunately, her secret is soon discovered by Takumi Usui, a popular boy at Seika High.