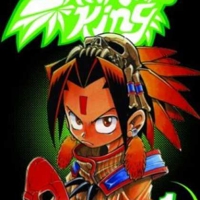 Manta Oyamada, a shrimpy, studious, yet cowardly, middle-school student from Tokyo, attempts a shortcut one night through the graveyard to get home after a late night of cram school. While travelling through it, he encounters Yoh Asakura and his “companions”: a graveyard filled with ghosts. Yoh reveals himself to be a shaman, a medium between the world of the living and the world of the dead. Yoh also demonstrates shamans’ ability to unite with ghosts to achieve a shared goal. Quickly after meeting one another, Yoh and Manta become best friends while Yoh uses his shamanic abilities to help them out through various tasks.

The Shaman Fight is a battle held once every 500 years between competing shamans to choose a winner who will become the highly sought-after “Shaman King”, one who is able to contact the Great Spirit (the spirit that every soul will eventually go back to). The winner gains the ability to reshape the world in any way they want. Anna Kyoyama, Yoh’s fiancée, soon enters the picture and prescribes a brutal training regimen, in order to prepare Yoh for the tournament. Thus begins the plot that will lead Yoh on a journey that will lead him to befriend Ryu, Tao Ren, Horohoro, Faust VIII, Lyserg Diethel, and Joco.

During the Shaman Fight, Yoh encounters Hao Asakura, a strong shaman who wishes to eradicate humans and create a world for shamans. At the end of the shaman battles where the remaining teams consist of Yoh and his friends, the X-Laws, and Hao’s team, the remaining teams decide to forfeit the tournament crowning Hao the title of Shaman King. As Hao is led away, they decide to attack Hao during the time he is merging with the great spirit which is in a coma. To do so, Yoh and his friends must defeat The Patch Tribe members who are obliged to serve under the new Shaman King.

Seven years later, Hana Asakura awaits at a station for the five legendary warriors and his parents, Yoh and Anna.