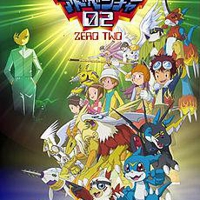 Taking place a few years after Digimon Adventure, the Digital World comes under attack from a mysterious human calling himself the Digimon Emperor who is enslaving Digimon with his Dark Rings while building Control Spires that negate Digivolution and act as aerials to power the Dark Rings. To fight him three new Digi-destined, Davis, Yolei and Cody along with the now teenage T.K and Kari, each gain a type of Digivice called a D3, which allows them to open a gate to be transported to the Digital World through any computer. They are also given D-Terminals that hold Crest-themed relics called Digi-Eggs (DigiMentals) that allow Patamon and Gatomon, along with the new Digimon Veemon, Hawkmon, and Armadillomon to Armor Digivolve as a counter to the presence of Control Spires. The Digimon Emperor is eventually revealed to be the boy genius Ken Ichijouji, who flees to the Digital World before the Digidestined can confront him at his home.