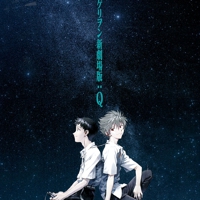 The third of four films released in the Rebuild of Evangelion tetralogy, a remake of the original anime series Neon Genesis Evangelion. The storyline departs markedly from where Evangelion 2.0 had ended. Very few of the story elements hinted at in the original preview from 2.0 remain in the final work.