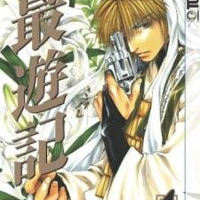 Saiyuki is the story of four anti-hero-like heroes: the monk Genjyo Sanzo (or just “Sanzo”), the monkey king Son Goku, the half-demon Sha Gojyo, and the man who turned into a demon Cho Hakkai (formerly known as Cho Gonou). They have been dispatched by the Sanbutsushin (the Three Aspects of Buddha, who relay the orders of heaven) to travel to India to stop the possible resurrection of the Ox-Demon-King, Gyumaoh. Along the way they are beset by inept assassins, bad weather, and their own tragic personal pasts. Meanwhile, the villains, two unlikely confidants, Gyokumen Koushou (Gyumaoh’s concubine, a demon) and a mad scientist, Dr. Nii Jianyi (a human), continue their attempts to restore the long-dead king. These experiments, a forbidden mixture of science and magic, spawn the “Minus Wave”, infecting all of the demons in Shangri-La with madness, shattering the fragile peace that once existed between humans and demons. -Wikipedia

Manga Rating
9.0/10
111 users rated this.
Similar in these categories.