Daphne in the Brilliant Blue [TV] 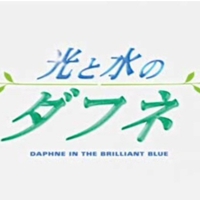 In the future, water has covered much of the Earth due to the effects of global warming, leaving the human race to live on neighboring floating cities. The orphaned Maia Mizuki, 15, just graduated from middle school and has already applied for employment in the elite Ocean Agency, part of the futuristic world government. Only the best, most intelligent, and physically fit students are eligible for admission. Maia, the series’ protagonist, is set to become one of the few.

But her ideal life quickly falls apart. To her disappointment, Maia unexpectedly fails her entrance exams despite her high grades. Making matters worse, she promptly gets evicted from her house, pick pocketed, taken hostage, then shot. She is “saved” by two females (Rena and Shizuka) that are part of an unorthodox help-for-hire organization called Nereids (inspired by the Greek mythological Nereids). With nowhere to go, Maia joins up with Nereids, taking jobs from capturing wanted criminals to chasing stray cats, often with unexpected results. Gloria and Yu later join up with Nereids.

“Daphne”, Greek for “Laurel tree”, in the title refers to Maia’s grandfather last words. “Brilliant Blue” refers to the fact that this is a world covered by water with almost no land. The world consists of vast oceans, a few islands, and floating cities.

The manga of the series is a prequel that takes place a century ago when humans were forced to live undersea when the cities were Greek named. Elpida means “hope.” Now they’re Russian inspired, like Kamchatka. Ai Mayuzumi, Millie’s great grandmother is the protagonist of the story.