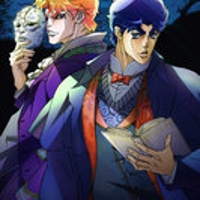 Late 19th century. Young, handsome and wealthy English nobleman Jonathan Joestar seems to have everything people crave for. His lowly-born adopted brother Dio Brando, brought into the family by Jonathan’s father George, is particularly jealous of Jonathan. When Jonathan found out Dio’s horrible secret, he tried to use an stone mask that looks like a torture instrument to kill Jonathan, who’s into archaeology and might make the death looks like an accident. However, the stone mask is anything but a simple instrument.