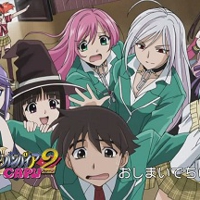 The story starts when a guy called Aono Tsukune fails in getting accepted to a good highschool,so he ends up going to a monster highschool.In the beggining he doesn’t know the fact that the highschool where he is is a monster highschool but he realizes soon about this fact.
In this place he met Moka,the only person who knows that Tsukune is human(the others characters thinks that he is a very powerful monster and that he never uses his power because of that).
Moka is a female vampire who has a rosary that seals her power and Tsukune is the only one who can remove it in order to set free inner Moka, the on who has the most amount of power.
Tsukune meet other girls in the story besides Moka that are part of the main cast as Kurumu,a sucubus,Yukari,a very intelligent witch, Mizore,an “ice woman”,Kokoa,who is Moka’s sister and Ruby,another witch. In addition, there’s male characters as Ginaei Morioka,a werewolf and a lot of people at he school as the principal , the teachers, ……
First season’s plot starts when Tsukune arrives at the monster highschool.He is afraid of the monster but monsters are afraid of humans,something that is quite a paradox.As the show go on Tsukune met the rest of the main cast which lead the anime to have a huge amount of fanservice with typical scenes as bloody noses, pantyshots,….. until four or five chapters before the end of the season.At that moment, Tsukune is arrested by the disciplanary squad because he is human. Her friends save him but in the process he ends up dying and he is revived with vampire blood
In the second season,after Tsukune’s summer holidays ,he goes again to the monster highschool and he met Kokoa, Moka’s sister, which is very angry cause the Moka that she rememebers is the one that is sealed inside the nowadays Moka(the one who is sealed has gray her while the one who isn’t has pink hair)and is her reason to go to the monster highschool(Kokoa is a vampire too)
The season goes on smoothly, with a lot of fanservice (maybe more than in the first season).
One of my favourite chapters of the season is one when Tsukune’s aparty goes to the human world and Tsukune’s mum sees Tsukune with five girls in this room, something hilarious.
In this season the most important part of the plot is when the barrier that separates the human world and the monster world breaks.Moka has to break her rosay to restore it so after that just inner Moka exits.
Tsukune is very sad so he ends up going to see Moka’s father. Then, he asks him to do a new seal.He gets the new seal, pinks hair Moka returns and the season ends without a real conclusion to the story.
Some recurrente gags of the season are: “capuchu”,which is the sound that Moka makes when she sucks Tsukune’s blood,Mizore’s personality(she acts like a spy most of the time),a sentence that Ruby always say(“a lot of things happened…”) and the rivalry beetween Kurumu and Yukary.