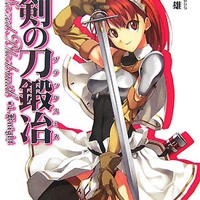 4 years ago, a great war known as the Valbanill War ravaged the land. One of the war’s most dangerous weapons was the Demon Contract, where humans sacrifice their bodies to become powerful demons. Realizing the damage the contracts have caused the land, the surviving nations made peace and banned the use of the Demon contracts.
Cecily Cambell is a 3rd generation Knight from Housman, one of the cities of the Independent Trade Cities, a democratic federation of cities. As her grandfather was one of the founders of the Independent Trade Cities, she is proud of her heritage and wishes to protect her city as a knight, like her father and grandfather before her. One day, she fights a mad veteran of the war causing trouble in the market, and, inexperienced and overmatched, faces defeat. But she is saved by a mysterious blacksmith named Luke Ainsworth. Cecily is impressed by Luke’s katana, a weapon she has never seen before, and asks him to make one for her. Her involvement with Luke will bring her to an adventure she never expected.