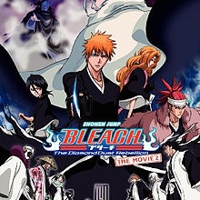 Bleach: The DiamondDust Rebellion, is the second animated film adaptation of the anime and manga series Bleach. The film is directed by Noriyuki Abe and co-written by Michiko Yokote and Masahiro ?kubo, and the theatrical release was on December 22, 2007. The theme music for the movie is “Rock of Light” (? Hikari no Rokku?) by Sambomaster. (source: Wikipedia: http://en.wikipedia.org/wiki/Bleach:_The_DiamondDust_Rebellion)