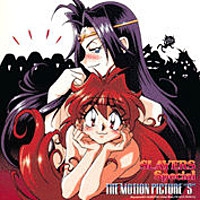 In these three self-contained half-hour stories, Lina Inverse and her partner, Naga The Serpent, take on a variety of jobs for quick cash, food, and/or their own skins. The first episode, “The Scary Chimera Plan,” pits them against a lunatic magician who intends to use Lina to create a fearsome, spell-slinging monster. Then, in “Jeffry’s Knighthood,” they’re hired by an overprotective mother to see that her son – a young man barely capable of holding a sword – becomes a respected knight, by “helping” him fight off the marauding soldiers terrorizing the area. Finally, “Mirror, Mirror” puts the two in a race to hunt down and capture (for bounty, of course) a rogue sorceror who’s found an ancient artifact that can create loyal duplicates of anything or anyone, including his enemies.