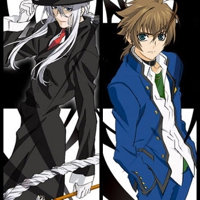 The story revolves around the high school student Akira Nikaido, a typical slacker living a normal life. That is, until he meets the mysterious Shirogane, a man who suddenly appears and tells him that they have a destiny together. When Akira hears this, he is shocked and doesn’t believe a word of it. Suzuno Aya, a friend of Akira, forgets something in the school one night, and asks Akira and Kengo to help her and go find it. He agrees, and while there, he gets attacked by a shadow monster. Shirogane convinces him that the balance between the human world and the shadow world has been distorted and that Akira must become a “shin”- a creature of the shadow world- in order to help restore the balance. But if Akira stays as a “shin” he will become a shadow himself, and normal people will not see him any more. Shirogane wanted to be with him and lied that if he became his shadow he will be seen by other people again. Soon after a person called “master” told Akira that he did not need Shirogane to become his shadow because he has an object that if he steps on it is will become his shadow,which made Akira angry at Shirogane. After, Akira notices that his friends Aya and Kengo could see Akira and Shirogane when they are “shin,” so Akira decides that the two could join them and help Akira and Shirogane to get the balance back to normal.