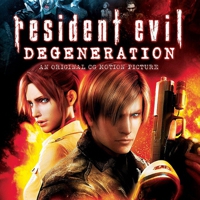 Unlike the Resident Evil live-action film series, Degeneration is set within the same universe as the original video game series. The main characters are Leon S. Kennedy and Claire Redfield, who appear together for the first time since the 1998 game Resident Evil 2.

In the year 2005, the Harvardville Airport is under attack by a zombie infestation. Claire Redfield is now a member of TerraSave, an organization which handles search and rescue at chemical and biological attacks. Claire was on-site to meet a family she is aiding, and coincidentally runs into U.S. Senator Ron Davis, who was trying to avoid protesters. Meanwhile, a passenger aircraft approaching the airport crashess due to a man infected with the T-virus, who caused an infestation on-board. Unable to escape from the airport terminal, Claire, Rani and Davis, along with an airline stewardess, shut themselves in the VIP lounge and call for help. By nightfall, the airport has been locked down by the local Special Response Team and the United States Marine Corps, aiding evacuated survivors. Two officers Angela Miller and Greg Glenn, are joined by Leon S. Kennedy.